When the first installment of the new IT franchise arrived it was a breath of fresh air. The perfect blend of horror and comedy. The kids were all lovable losers and you walked out of the theater feeling something. Going into Chapter Two, we knew the story would advance 27 years which meant that we’d get the adult versions of the kids and that could get tricky.

It Chapter Two put together a dream cast with a combined 2 Oscar nominations, 6 Emmy nominations and 1 Emmy win (2, 3, and the win respectively from Jessica Chastain alone). Now the question was how they would go about telling this part of the story and could they truly capture the magic that the kids did with a group of 40 year olds?

It Chapter Two captures a lot of the comedy and the horror that we were given in the first with great performances from Bill Skarsgard, James McAvoy, and Bill Hader. However the nearly 3 hour run time did not feel justified and the ending left me disappointed.

I’m not going to waste time recapping the story. The first 5 minutes were shocking enough on their own and if you are watching chapter two, I’m assuming you saw the first film.

The movie started with a shot of Beverly when Pennywise made her float. It’s a jarring image and an immediate reminder of what was definitely the darkest time in our protagonists lives. I couldn’t help but think about the 4 year old I saw walking into the theater with her mom. It wouldn’t get any easier from here.

It Chapter Two did start out in the modern day and within two minutes we get an on-screen gay kiss. Of course, this was fine by me but it was definitely the earliest I can recall a scene like this in a movie. Especially one of this nature. While there were audible groans in the theater (I live in South Carolina after all) I thought this was an amazing choice. Before it could fully sink in however the couple is confronted by a group of homophobes.

What happens next was tough because it’s a brutal hate crime that is bad on its own but ends worse when Pennywise shows up. Again, this was the first 5 minutes and we get two very jarring moments before we’re reminded why we came to the theater in the first place. The tone was set.

When the second film was announced I had a few thoughts besides my concerns over the potential casting. Sequels usually work because you get to see familiar faces returning. Of course Pennywise would be back but we’d have to be won over by a completely different group of leads after falling in love with the kids. The studio had more success with chapter one than anyone expected and it would have felt wrong to just toss the kids to the side, so they didn’t.

The kids were not just shown, they were given at least a full hour. Bill Hader’s Richie does most of the heavy lifting in making us fall in love with the adult versions of the losers. While Isaiah Mustafa’s Mike catches us up on what’s been happening in the time the rest have been away. Then it’s time for the extended flashbacks.

At one point the line is uttered: “You remember what happened that summer.” (Or something like that…) and then we’re off. Each kid gets an extended flashback. An additional encounter with Pennywise from the summer after the first movie ended. While some are significant, or feel significant at the time, the rest were simply someone making the decision to make sure the kids got some more screen-time. Again, I get it, but it was very clear that this is where the extra hour in run time could have been cut down a bit. 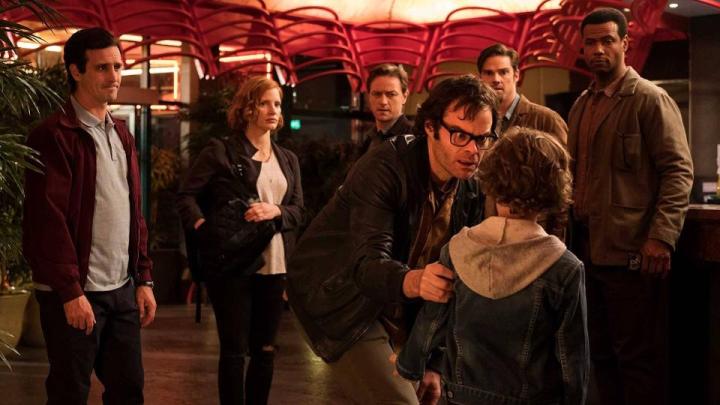 In one of the flashbacks we learn about a huge secret that one of our players has been keeping since their youth. Later in the film Pennywise taunts them with exposing it but after all of this the secret never gets shared openly. We do get a moment that I guess you could take as being a special moment between the character and the audience but it felt like there was going to be more to come from it. Especially with how the movie started.

Look, this is one thing that the movie did carry over from the first. Pennywise is terrifying. He doesn’t follow typical horror movie tropes surrounding clumsy killers or predictable timing. He is perfectly fine killing kids and he shape-shifts. You don’t know what he’s going to manifest as and this is taken full advantage of.

In the first film, the marketing team cut a trailer that essentially showed you one of the opening scenes in the movie. But not the whole scene and not the worst part of it. When Georgie’s arm was bitten off I was petrified but also impressed that the trailer had set me up so well. When I saw the trailer for the It Chapter Two I thought that they had gone away from the formula and shown me too much.

I was wrong, this was another setup and even me telling you this won’t prepare you for it. The fact that Pennywise doesn’t hold back and has such shocking kills is what makes the horror aspects work so well. People were jumping throughout the movie and a girl near me was completely turned in her chair at multiple points, unable to watch.

Humor and The Love Triangle

The humor was mostly carried by Richie and Pennywise. There were funny moments from the others but for Bev, Bill, and Ben (I just realized they all have B names) it was all about the love triangle that no one was there for. Ben (Jay Ryan) has grown into a tall, dark, handsome, and wealthy architect while Bev has grown up to marry her father. Bill is a successful author and screenwriter (though his endings suck, foreshadowing?) with a wife who is an actress. Bev has a clear reason to perhaps want out of her relationship but why did Bill need to entertain this? He hadn’t seen Beverly since they were kids and we get no clue that he’s unhappy in his relationship.

Meanwhile, the movie tries to get way too much mileage out of the poem Ben wrote Bev. She remembers it but thinks it was written by Bill and Ben quietly wonders if he should tell her it was him. 27 years but when they stepped back into Derry they became their child selves quickly. Anyway, back to the funny stuff.

Richie has jokes throughout the movie and Eddie (James Ransone) is just a hilarious character on his own. Pennywise is funny until he isn’t. I will say that the adults did not have quite as much fun as the kids did but there are enough laughs to level out the weight of the violence.

The bar was set incredibly high by the first IT movie and perhaps that was a factor here but I was truly let down by Chapter Two. Even despite all of the flaws I mentioned above, there were enough quality scares and laughs to allow me to forgive them with a great ending. However, we get a very disappointing resolution to our issue and it felt like Pennywise was way too easy to defeat in the end.

They try to save it with some sentimental moments in the closing minutes but I was personally already let down. I’m not saying that the movie is one that should be skipped, just don’t expect as complete a movie as the first one was.

PS. My review ran a bit long but not quite as long as the movie did.

2 thoughts on “It Chapter Two, too long and anti-climactic (review)”