Will Smith adds another futuristic action thriller to his filmography with Gemini Man, where he plays himself and a younger version of himself. Did it work?

Yet again I was pressured into watching a movie that I wasn’t necessarily hyped for. It comes with the territory of course but in this case I was actually surprised by how glowing the reviews were for Gemini Man. Now you might look at the Rotten Tomatoes score (24% at the time of this writing) and say:  “Michael, what glowing reviews?” but then you must be new here.

Action movies are one of the genres where I don’t care what the critics have to say. Nobody who is an action movie fan cares about the technical aspects of the film. They just want to be entertained, and with the audience rating being 84% currently, I’d say that the people are entertained. Seeing this large of a disparity did increase my interest so I was in the theater first thing Saturday morning.

The story reminded me somewhat of The Bourne Identity. One man with special skills vs. a corrupt government agency. The action scenes, especially between the Smiths Will, were reminiscent of the Bucky vs. Cap fight scenes in Winter Soldier. Overall, it was a fun action movie. Didn’t change the game but didn’t break anything either.

The Action and Pace

The most important part of any action movie is the action. John Wick 3 clearly understood this as the movie is 90% action. With Gemini Man they thrust you directly into a job for Will Smith’s Henry Brogan. It’s a difficult one and you can tell that he’s not at the top of his game. The confidence and the steady hand are gone. Brogan is ready to retire and we are made aware that this is his last job.

Now this isn’t the first retired spy movie I’ve watched this year either. The other was Polar starring Mads Mikkelsen so this idea of a spy retiring and having to be taken out is definitely not new. You work for an organization that kills people, you killed important figures all over the world, you become a loose end when you try to step away. Brogan gets to breathe for barely one day before he is targeted and it’s on for the rest of the movie.

The movie slows down briefly to introduce us to Mary Elizabeth Winstead’s character, Danny, and to add some additional background information but at almost every turn there is some sort of encounter with death. Brogan and Danny team up after he realizes that they’re coming to end her too. We get to see her in a close-quarters fight where she gets to show off her skills not long after. My favorite part of this fight was that they didn’t make her do anything superhuman. The man she’s fighting is clearly stronger than her physically but she combines her intelligence and technique to get the job done.

The non-action parts are brief and all add context to the story or provide tension between the action because you know something is coming. 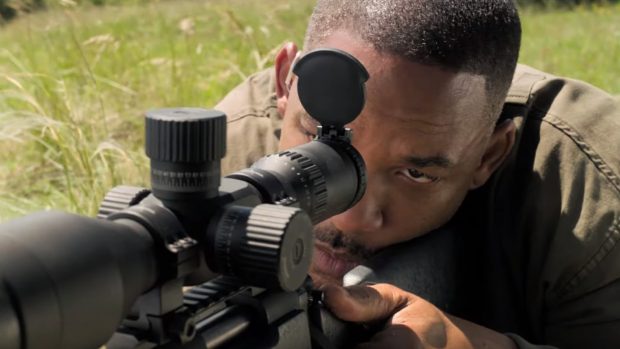 I feel like I’ve already given you this but I will try to break it down fairly clearly. Will Smith’s Henry Brogan is trying to retire from his spy organization. However, he comes upon some information that he isn’t supposed to have so they decide they have to kill him.

After surviving the first attack, he teams up with Winstead’s Danny and they flee. He enlists an old friend, Baron (Benedict Wong), to help them out and he acts as their pilot to get them overseas. He also adds some comedic relief because that’s what Benedict Wong does. The encounter with Junior happens and Will realizes something isn’t right.

From there, the team spends the rest of the movie trying to convince Junior that he’s been manipulated and trying to bring him over to the good side. Clive Owen plays the mastermind behind Junior who has known Brogan since their early military days and raised Junior as his son.

There are several intense scenes as Junior wrestles with deciding what to do and Brogan has to decide if he needs to put the kid down. Between Junior’s internal struggle and their fights being one trying to kill and the other trying to talk, this is what reminded me of Winter Soldier.

Things get even more complicated when we realize that Junior wasn’t the only project that Clay Verris (Owen) was working on. There is one showdown in particular that I don’t believe anyone saw coming and I think elevates the movie to another level. I don’t want to say too much so as not to spoil it but when you see the movie you’ll know what I’m talking about.

Now Gemini Man does blatantly foreshadow a lot of the big moments but even if you hear them you won’t predict how they play out. I wouldn’t say it took away from the experience much at all and some won’t notice the foreshadowing.

The goofiness of the way old Will fades into young Will in the trailer is part of why I wasn’t excited about Gemini Man. They didn’t do an amazing job of de-aging Will and there are two key features that I see were hard to pull off.

The eye and forehead areas were both still very old looking and it made Junior’s whole look seem off. At points it looked like they were using the baby face snapchat filter. Now Junior did spend a lot of the movie confused and thinking hard. If this was his natural state then perhaps his rough forehead was a symptom. Despite this, I was able to enjoy the movie. It only made it slightly goofy.

If you enjoy action movies you’ll enjoy Gemini Man. The fights are great, the weapons are cool, and there are enough futuristic elements to keep your attention. If you’re watching it to get swept up in a complex story, save your money.