With my big board out, it was time to finally speak on whose names I’d like to hear the Mavs calling if they keep their pick.

I needed to write this before the Mavs inevitably traded their second round pick. The Mavs, for the first time in a long time, have two big time players that are under 25. Luka Doncic and Kristaps Porzingis are the future but we need to add complimentary pieces around them. While there is a ton of talk online about 30 year olds that might come in and help the Mavs compete, I’m way more interested in the young guys we can bring in who can grow with the big 2. The types of players we need fall into two camps.

Wings: More specifically catch and shoot guys who will take advantage of Luka’s set ups or Kristaps’ gravity in the pick and roll game. While the Mavs love midgets, this year’s playoffs (and if you listen to the pod Max and I did on playoff trends you’ll know this) proved that teams need as many guys as they can get between 6’5″ and 6’9.” The more skilled the better. This is honestly my primary focus this offseason for the team and there are plenty of prospects in the class that fit the bill. While I’m putting priority on the ability to get buckets, if that player can be a switchable defender also, we’re REALLY in business.

Bigs: The second category is bigs. Unfortunately, the big man pool in this year’s draft is not deep. Especially for the type of big the Mavs need. We have three different type’s of athletic 4/5 men in Kristaps, Powell, and Maxi (if he’s retained) already, but none are able to bang inside. We tried Maxi in that role late in the season and it took away from what makes him special. We need a big body big.

Now he doesn’t specifically fit into the wing category but he’s close enough and fills another team need, a secondary playmaker. Nowell was the Pac-12 player of the year this season and his offensive game is incredibly steady despite his youth. Nowell got into the lab between his freshman and sophomore year and ended up shooting 44% from 3 (82nd percentile on spot-ups) this season on about 3 attempts per game. While I love his ability to hit the outside shot he really eats in the mid-range. He has a quick first step to get into the lane and from there he can pick you apart. Whether it’s for a mid-range pull-up jumper, a floater, finding a cutting teammate or taking it to the rim. He can give it to you however you want it and is great at picking his spots.

Unfortunately, Washington played almost nothing but zone so the man defensive sample size is quite small but he is engaged on defense and moves well so I would be surprised if he was a negative there.

Zach Norvell is much like Nowell but was asked to do different things at Gonzaga. Both are solidly built guys that are steady performers and, most importantly, hit jumpers. In my early scouting I was sleeping on Norvell because he didn’t do a lot to pop off of the page but Gonzaga had a lot of talent and they spread the ball around. He did no more than he had to and knew his role. His role in Dallas would be similar as a guy who can score, defend the other team’s guards and finish at the rim on the break or on cuts. Listening to him speak he just feels like a guy who is going to be easy to plug into the rotation for whatever team he goes to. By the way he shot 37% from 3 on 7 attempts per game. He’s in the 86th percentile on spot-ups and 90th in the pick and roll as a ball handler.

Louis King would be a somewhat risky play but has the most upside of the guys listed thus far. You see his measurements and you’ll want to ask why he’s listed as a Shooting guard but his frame is not going to allow him to bulk up much so you won’t want him trying to handle the big wings of the league full time. There are some concerns about his body. He has already had an ACL injury and a meniscus injury but he seems to have bounced back from both. The part of his game that I love the most is his shooting ability and his ability to run in the open floor. His length adds disruption on the defensive end as well. He shot 38.6% from 3 this season. 68th percentile on spot-ups. 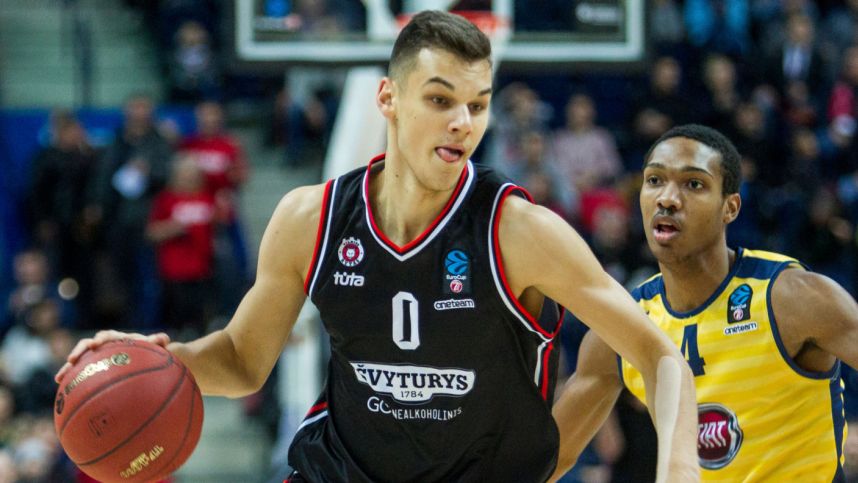 Sirvydis is a guy I fell in love with within a few minutes of watching him. At his age he established himself as a big time player already overseas and he seems hungry and determined to continue to grow. Overall for the year he shot about 36% from 3 but I always grade Euro-league shooting on the curve. He has a beautiful quick release and can also put the ball on the floor. When he does, he is very aware of his teammates and often makes flashy no-look passes off his penetration. He plays with a lot of energy, gets his hands in the passing lanes, pokes balls away from defenders dribbling loosely and just plays hard overall. He’s not a player that will be on the court and not be noticed.

Finally, a big man. I almost put Fernando here but I don’t expect him to be on the board at this point. Konate is a guy I liked a bit last year but wanted more from. He came back this year with a 3 point jumper (his mid-range was already solid) and that was enough for me. He’s an undersized center but with his weight at 250 (mostly muscle) and his 7 foot wingspan he is a terror inside. He is a master of verticality and has amazing timing on his blocks. He’s very mobile and is a great screener which means he’ll be able to do a good bit in the screen and pop or screen and roll game.

A big man that averaged 3 blocks a game and was shooting 39% from 3 (on 3 attempts per game) is exactly the type of player I want in the Mavs bullpen.

Yell at me on twitter at @Bibscorner. Thanks again for reading.

PS. If you missed it. Make sure you check on this year’s big board.