Following behind my top 50 I wanted to address the sleepers on my big board and why I am so high on these players. Here are the reasons I like these 5 guys more than most do.

Some people pick sleepers based on what they hear from other people. Some people see a guy play before they know where he’s projected and wonder why he’s not rated higher when they find out. Me personally, I look for certain things in a player to make him a sleeper.

Most of my sleepers are going to be two-way players. A guy who can score and plays defense is more likely to get playing time early vs. a guy who only does one or the other. These guys also display leadership qualities that some other guys may not. They lead their team, they are floor generals, or they are vocal on the floor. The final piece can’t be described but it is a feeling. When I watch a guy play, I watch the decisions he makes and why he makes them. These guys all have that “it” factor when it comes to the decisions they make on the floor at any given time. They make winning plays. 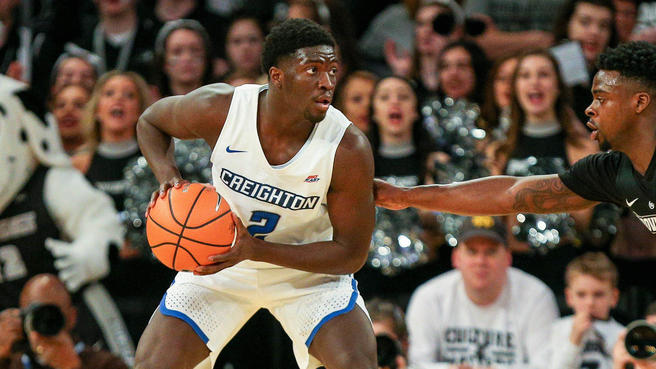 Where I ranked him: 3 Consensus: Mid-late 1st

Why I like him: Khyri Thomas is first on our list and was an elite player on both sides of the ball. First of all, he was the Big East Defensive Player of the Year for the past two seasons. An amazing feat for a guard, especially one who only averaged 1.5 and 1.7 steals per game. He is a lock down defender and took pride in guarding the other team’s best player. Despite his stature, his 6’10” wingspan will allow him to guard both guard positions and get away with guarding some 3’s.

Offensively, he shot 41% from 3 this past year and 39% the year before. He increased his attempts from 3.3 to 4.6 from his sophomore to junior year as well. He is not just a 3 point shooter though, he also did damage inside the arc, shooting an absurd (for a guard) 64% from 2. This was a huge factor in his 63% Effective FG%. Despite lacking elite athleticism, he is a very good finisher inside because he is decisive and goes to the rim strong. His shot is smooth and consistent and he never forces his offense. This combination is why he shoots such a high percentage. An elite defender that scores at all 3 levels. What is not to like?

Why other people aren’t as high on him: The main reason I see for people not liking him is his ball handling. While he doesn’t put the ball on the floor much, when he has to he isn’t exactly fumbling the ball. I could see him having a Jimmy Butler trajectory where he has to work to become the man and working on his ball-handling will be one of the key areas for him to improve. The other reason he may be lower is his age as a 22 year-old prospect.

Best Fit: Right out of the gate I would want Khyri on a team with an established PG who is maybe not a great defender. He’ll guard the other team’s point guard for him and also provide some scoring to take pressure off of him at the other end. He can also play this role off the bench for the second unit to start. I honestly think Portland, Philly, or Brooklyn could be good landing spots.

Why I like him: I’m going to keep this part simple. Elie is a pass-first point guard who has the ability to take over the game scoring if he chooses to. He’s actually very similar to Trae Young in that regard, however he’s a better finisher inside and takes better shots. He shot 42% from 3 this past season and has a beautiful, compact shot. He can score on spot-ups or off the bounce and gets into his shot quickly. In the NBA I feel he’ll have more freedom to take over games as he’s shown he can do by dropping 44 in one of his last Euro games.

Why other people aren’t as high on him: Nobody that I know has seen him dislikes him, in fact, most love him. The reason Elie isn’t high on boards is because people simply don’t know who he is. I love scouting and only heard about him as a first round contender late in the process.

Best Fit: Elie could go the way that Jawun Evans did for me last year if he goes to the wrong situation. I hope for Elie to go to a team where he can compete for the starting job, or where he can be the backup in his rookie year with the opportunity for a quick promotion. An example would be Utah. There, he can back up Rubio this season and play with another Frenchmen in Rudy Gobert. With Rubio’s contract up at the end of the season, he’d be primed to take over the job and form the back court of the future with Donovan Mitchell.

Why I like him: This one is the least of a reach now that people have started talking about him more. He’s shot up boards and moved his way to being mocked as high as 10 by some. With most having him 13 or lower though, I got some opinions who said this was still a sleeper pick. Lonnie is an amazing athlete and, once healthy, showed signs of greatness late in the season. The easy answer to why I like him is that he just passes the eye test. He can attack the rim off the dribble and shows signs of having deep 3 point range. He stepped up in big moments, is a fiery competitor, and though some say he takes too many risks on D, I love his activity. He’s not a polished product by any means but if given the freedom to fail until he figures it out, he could have a Donovan Mitchell trajectory.

Why other people aren’t as high on him: Lonnie came into his freshman year at Miami off of a knee surgery and likely wasn’t 100% to start the year. While other guys were already making names for themselves, Lonnie was finding his way and falling off of radars. He jumped back on them in a big way with his late season play and now is lighting up workouts so he’s started to climb, but it’s hard to move a guy that is just finding it ahead of a guy you’ve been on for months. For some people at least.

Best Fit: A basketball team. I really couldn’t pick a team that would be bad for him necessarily. If he goes to a team with an established 2 guard he’ll still be a good contributor off of the bench. If he is what I think he is a team will make room for him to be their 2 of the future.

Why I like him: Rawle seems to be hard to read for the masses as he’s mocked as high as 24 and as low as 54. He’s a big, strong athlete and that means he’s going to be immediately ready to play physically. He can hit the 3 at a decent rate but he’s primarily a slasher. Because of his body he’s able to be physical when attacking the rim. He keeps his head up when driving and tends to find the open man when doing so. His assist-turnover ratio was not great 1/1 but, at least when I was watching, he seemed to be making the right reads.

On defense he’s active. He digs off of his man and rotates to cover offensive guys who have been left open. At 5 per game, he was also a solid rebounder for a guard.  Lastly, he also carries leadership intangibles and this will allow him to do well on a young team if that’s where he ends up.

Why other people aren’t as high on him: He’s a role player. Teams are looking to draft stars and a guy who doesn’t project as one will be overlooked. This was the case for Draymond as well but these guys are important to winning teams. Ironically, he said in a recent interview that he wanted to be a guard version of Draymond.

Best Fit: I don’t think there is a bad fit for Rawle personnel-wise but I’d love to see him go to a young team that he can grow with.

Where I ranked him: 20 Consensus: Mid-2nd

Why I like him: The kid can shoot. In 3 years at SMU his 3 point percentage has been at 42% at higher (43.4% this year). Because of his size he is able to shoot over the top of defenders and doesn’t mind shooting with a hand in his face. He has deep range on his 3’s as well. He’s not great at the rim but has a strong floater game and can shoot off the bounce. His long legs take him to places it doesn’t look like he should be able to get to when driving. As a point guard he’s patient with the ball and lets plays develop. His size allows him to pass over the top and he delivers the ball multiple ways in the pick and roll. He has a 7’0″ wingspan and uses his length to bother his man as a defender. His X-factor is his calm, cool, collected demeanor.

Why other people aren’t as high on him: There are likely a few reasons people aren’t high on Shake. One is his age, as a Junior. Another is that people want to see him improve over time and his 3 point numbers remained consistent and 2 point numbers actually got worse from year 1 to 2. He improved in 3 but not back to his freshman year level, likely due to his usage increase. He’s also not an amazing ball handler (solid enough to me) and teams may not think he reads well as an NBA PG and may fear he needs the ball in his hand to be himself.

Best Fit: Shake is a guy that I’d like to see go to a team that will give him a shot off the bench. Whether it’s as a point guard or secondary guard I think he can come in and give you a scoring spark to start. He may be a guy that takes longer to show his true promise in the league, but I’m patient.

Feel free to let me know what you think of these five on twitter @MBibs or @BibsCorner!