My favorite player in college basketball this year, Carsen Edwards, ended up with the Boston Celtics. He was 13th on my board and there are plenty of reasons why.

If you’ve listened to a single episode of the 3rd Round Picks podcast or follow me on twitter you’ve likely heard me talk about Carsen Edwards. It was likely no surprise that he ended up in my top 15 when the board came out. In short, I love Carsen Edwards. I love his game, I love his personality, and I believe he’s going to be around for a long time.

Thoughts on the pick

I wasn’t exactly sure where I wanted Carsen to go but I hoped that he’d at least have a shot to be someone’s first point guard off the bench. In Boston, that has a good chance to happen. Kyrie is likely on his way out of town and some think Terry will be also. The Celtics are likely to pursue Kemba but either way it looks like the Celtics could work out for him. Additionally, I appreciate that he is going to be coached by a college-minded coach on a team full of young guys. I know Stevens will get the most out of him.

What to expect from him

Why he was slept on: Carsen is a walking bucket, this is well known. However, I think he got a bad rep from the way that he had to play this season. One that I don’t think is warranted. He took a LOT of shots this year. 20/game to be exact, 10 of them 3 pointers. His shooting numbers were down across the board because of this. Many will say that he was gunning and a ball-hog but if you watched Purdue play you know that he did that out of necessity and because it’s what he was asked to do.

His sophomore year when the team had more talent, Carsen took 13.5 shots per game. He shot 50.6% from 2 (as opposed to 44% this year) and 40.6% from 3 (as opposed to the 35.5% from this year. His volume and the attention on him will decrease in the league so I expect him to return closer to his prior year form. Now to his game. 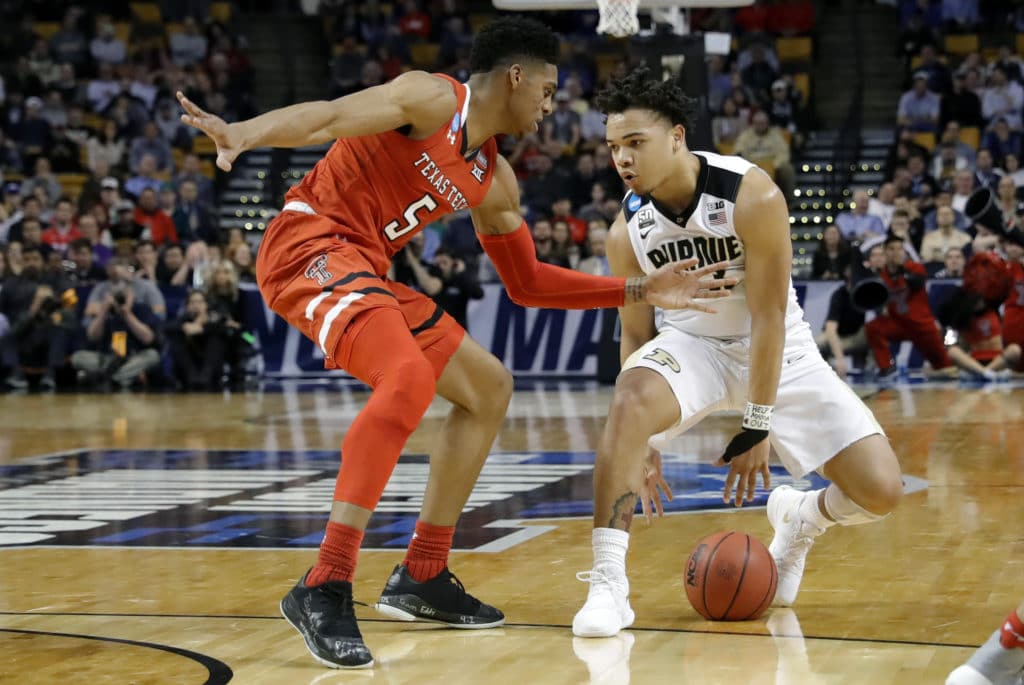 Offense: If you just watch highlight tapes you’ll peg Carsen as a shooter but his game is much more than that. Yes, he gets his shot off quickly. He can get it off the bounce, off the catch, off a curl, on a pull-up, he has Steph Curry range and his shot form is consistent no matter the shot. He’s small but he has long arms and gets great lift on the shot. He also has a nasty step-back to create even more space so getting his shot off will not be a problem. He torched Deandre Hunter in the tournament and that was not a fluke. Besides all of this he is also great finishing inside. He’s craft with the ball, knows when to go and when to pull-up. He’s creative around the rim finishing with both hands AND because of his running back body and background, he seeks and finishes through contact. He averaged 6 free throws a game this year and shoots it at a high percentage so you can’t just run him off the line.

He has a very tight handle, not flashy but functional. He uses changes of speed to get his guy off balance to get into his shot or penetrate the lane.

Defense: Defense is another area he is doubted and underrated. Because he’s short people automatically assume he’s a liability and because he’s a gunner and played 35 minutes/game this past year, people question the defensive effort. However, the first game I watched Carsen (Texas Tech) I noted that he can be a bulldog on D when he wants/needs to be. He gets low into his stance, has very long arms, fights over screens and has active hands. Because of his length he does a good job contesting shots. On the help side he digs off his man and usually makes the smart decision. Grant Williams said he thinks Carsen can guard 1-4 and while I won’t go there, I could see him causing some 4 men trouble.

Other: Things you can’t measure with stats is the way Carsen plays and carries himself off the court. He’s a tough-nosed point guard and a gamer. He’s also very coachable and willing to do whatever is asked of him for the team to succeed. His attitude toward improvement, humility, and toughness will all take him far.

One knock on Carsen that is somewhat fair is that he’s not a great playmaker. Now he’s not as bad as his numbers would suggest but he’s not someone I would call a setup man. He does look for guys off the bounce and push the ball ahead on the break but he could do more at the next level to make sure he’s getting everyone involved if he’s going to be running the point. There’s some thought that he will spend a lot of time off the ball and that’s fine, especially if it gets him floor time without the pressure of needing to create for others.

I already touched on this above but I do expect Carsen to get some minutes this year. How many will depend on what happens in free agency but I do expect him to be ahead of Tremont Waters on the depth chart pretty easily. Tremont should be spending a lot of time in Maine. With that said I’m not willing to make a real projection for this season but I would not be surprised if Carsen is used as a spark plug off the bench and has a 20 point game or two under his belt this year. If the Celtics strike out on high level point guards this offseason I expect Carsen to be in the first team all-rookie discussion.