I definitely breezed through Season 2 over the weekend here. I’ve already started season 3 but I do want to recap the second season.

Season 2 picked up where Season 1 left off and quickly got my attention. I am starting to care about more characters and getting into the story as a whole. I enjoyed the war, the new players, and won’t miss anyone who was killed this season. On to season 3.

Arya is still my favorite character. She is a survivor and early on in the season she had to watch yet another (technically Syrio might still be out there?) mentor die defending her but she continues to learn from them. She was able to listen to Tywin Lannister’s strategies and keep track of what was going on with her family. I’m not sure if he actually knew who she was but if he did he clearly didn’t care. She did leave the season with a new friend and ally in the “faceless man” Jaqen. I look forward to seeing him again in the future.

A new player introduced this season. We heard his name in season 1 but never saw him. When we meet him he has some witch with him and it’s clear his men are uncomfortable with her presence. He is determined to claim the throne and uses the witch (she sent some sort of ghost???) to take out his brother Renly. Renly had amassed a HUGE army and they all flocked to Stannis after Renly was killed. Caetlyn and another new player Brienne saw the ghost kill Renly. We left off the first season with a good bit of mysticism coming in and it was very heavy in season 2.

Rhakaro was actually one of my favorite characters in Season 1 and I only didn’t include him because I wasn’t sure he stayed with Daenerys. He apparently had but she sent him off to find refuge and his horse came back with his head in a bag so yeah…

We might as well touch on her while we’re here. I find her incredibly annoying thus far. She gets let into the mysterious city of Qarth after, again, acting bigger than I feel like she should be able to. Her isolation from the real action makes it clear they’re setting her up for something but they’re trying to grow her in the meantime. Her dragon is stolen and her people are slaughtered while she is in Qarth when it is then exposed that Xaro Xhoan Daxos (our first major black character) used her as leverage to become King of Qarth and kill the other members of the 13 besides his partner in crime… I can’t think of his name and IMDB isn’t helping because he didn’t look like a human but the guy that did the magic. Anyway, Daenerys finds her dragons and they are more powerful than you would expect for their size as they kill the magic dude and free her. Another season that ends with her doing something stupid and getting away with it.

Ayo F—… alright I’m doing it again. But I was definitely shocked at how easily Theon gave in and went back against the men he was raised with as brothers. Not just going back to his family but then attacking his former home and taking his “little brothers” hostage while killing Rodrik. In the end, he was either taken hostage by them or otherwise abandoned so we’ll see what happens from here. They destroyed Winterfell however.

Bran is growing up. It was cool to see him making decisions in the beginning and then see how they navigated things once Theon took Winterfell. He’s learning about the game and I’m curious what’s to come for him. I also didn’t think it was him and his little brother that Theon had burned. Figured they would have shown that.

His motives have become more clear and I was right about him. Self preservation is the key though he is definitely in love with Shae now. Bronn is still dope and still by his side so I look forward to seeing more of their dynamic. After cleaning things up early in the season Tyrion is set up by his sister and attacked by one of his own men during the battle having his face split. He was saved after that but then his father and Iron Fi… The Tyrells show up and claim victory for the Lions. We’ll see what becomes of the imp now that he has been demoted and not in the favor of the family.

Bonus: The Hound was really cutting cats in half with one swing of his sword though? Like damn… but he’s afraid of fire and I don’t know if that’s foreshadowing but a mighty man with a weakness… I expect that it is. 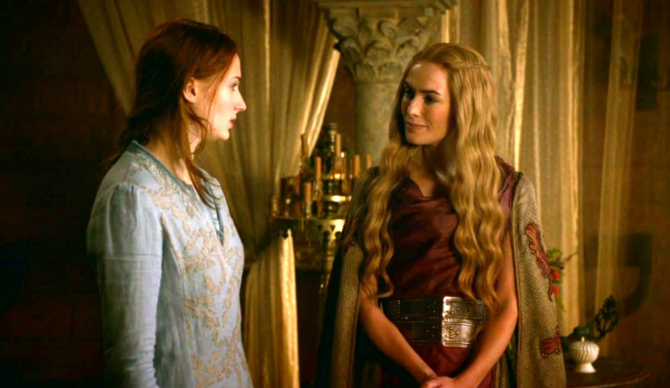 She really gotta die though… The setup on Tyrion and the mistreatment of Sansa? She really has some issues to work out and that’s probably a huge part of why Joffrey is how he is. I’m not trying to spend a ton of time on her. She gotta go.

He’s growing on me… He’s not as bad as Daenerys yet but he also is clearly being set up for some great reveal somewhere down the line. He messes up when he’s unable to kill the wildling chick and ends up being captured. We’ll see how that plays out later.

EXCUSE ME?!? I mean I know we saw one in season 1 but I didn’t realize it was about to be a zombie army. I’m so confused lol. I didn’t realize Game of Thrones was going to throw all these variables at me. I don’t know what to make of the zombie situation. I guess we’ll see them more in Season 3.

Season 2 was more action packed and I enjoyed that. I touched on a lot of specific events but on a deeper level I am gaining a bit more respect for “wildlings.” In season 2 we spend more time with a few of them and hear them refer to themselves as “Free People” and I like that. It’s interesting what that says on a deeper societal level. I just accepted that they were wild, untame, dangerous people when we were introduced to them based off of the name and the few I saw but as we got to know a few of them I realize they are just people, trying to survive. Not much different from the rest except they don’t live by the societal rules. Interesting indeed…

Now I’ve mentioned that I started Season 3 already (about 25 minutes into the first episode before I sat to write this) so I hope I didn’t touch on anything that just happened here.

I expect I’ll finish Season 3 late in the week. Season 3, Episode 9 is the first episode rated a 9.9 on IMDB (there are 5) so I’m looking forward to it.

Thanks for the read!

P.S. I might have to chill with the pictures. I keep accidentally seeing spoilers no matter how specific I am with my searches smh.