To me, Lebron cemented his legacy when he left Cleveland. It solidified it for me that he would never be as great as Jordan. I do believe he is the most gifted player ever but there are a few things missing to solidify his greatness. Most paramount among those things for me is that he is not a closer. He has come up short in many big moments (he was the 3rd leading scorer for Miami in the 2011 series for example) and I did not want him to win a ring while being carried by other players. When he won in 2012 by putting the Heat on his back I felt that I could be happy for him getting his (what I thought was inevitable) ring.

With that said, though the debate is dead in my mind, it rages on. There are many excuses that people use for Lebron’s shortcomings but in this two part series I just plan to tackle my two least favorite. Today we are going to look at Jordan and Lebron’s opponents.

One of the main Lebron defenses has been that he faced tougher opponents. There is an image going around saying “Jordan only faced 9 Hall of Famers in his 6 Finals appearances, Lebron faced 26.” But if we’re counting 37 year old Jason Kidd and 37 year old Tim Duncan… what are we really doing here?

I decided to go team by team, player by player. What were they doing THAT year. Their careers aside, I want to know what MJ and Lebron were facing during that particular series and I want to rank the teams worst to first based on their play in that vacuum.

To help me rank the teams objectively I came up with a point system using just the stats and accolades of key contributors which I’ve outlined below:

For the finals contributions I only included per game averages at or above 9.5 points, 5 rebounds, 4.5 assists, 1 full steal, or 1 full block. (both Jordan and Lebron had opponents with stats just below the threshold). I also did not include players that missed more than 1 game in a series (Lebron lost a player this way, Jordan did not but it did not affect the team’s place in the order.)

The teams are listed from worst to first below. (If you don’t care about the individual teams you can skip to the bottom for the answer on who came out with the toughest opponents)

This team won 2 games against Jordan’s Bulls. John Stockton’s production plummeted from the 1997 series to the 1998 series. Malone pretty much had the entire team on his back. As a new NBA fan (and Jordan hater) I felt sorry for the Mailman having to go down to Jordan a second year in a row.

Obviously this team is near and dear to my heart but as a collective they come in as the second worst of the 13 Finals opponents. Dirk, like Malone, had to put the team on his back but had ample help from his sidekick Jason (JET) Terry. Marion frustrated Lebron on the perimeter and Chandler was always there to meet him at the rim. Lebron was actually the 3rd leading scorer for Miami in this series. The Mavs won in 6. 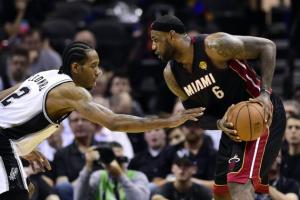 One of the few teams that had 7 key contributors, this Spurs team actually had the worst “best player” in 2014 Tony Parker. Kawhi was still figuring things out and Tim Duncan (37) and Manu (36) were well past their primes. This team won the series in 5 games. Popovich was named Coach of the Year this year for a reason.

We took a little bit of a jump to get to this team. Clyde vs. MJ was the debate of the times and MJ left no doubt about who was king. Clyde had plenty of contributors on this team as every player listed was entering or near the twilight of their prime but he was the lone star and it wasn’t enough. The Bulls took the series in 6.

Just edging out the 1992 Blazers is Lebron’s first finals opponent. 2007 Timmy was just a tad below 98 Malone but it was Tony Parker who led the way in scoring for this team. They also had the legendary stopper Bruce Bowen and the combination carried them to a 4-0 sweep of Lebron’s Cavs. This was Lebron’s worst Finals team but we’ll get to that on the next article…

This is the 3rd and final time you’ll see the Spurs here. I feel like the Spurs rankings will be the most controversial part of this article. Timmy paced the team but it was Lebron and the Heat who would win the epic series in Game 7.

To win his first title Jordan had to get his Bulls past Magic and the Lakers. The Bulls lost game one but proceeded to win the next 4. MJ had finally climbed the mountain top and would only relinquish the crown when he stepped away from the game. Bronsexuals (s/o to @Jaydogon for flooding my timeline with this term) like to talk about how this Lakers team was old but Magic was 31, Perkins and Worthy were 29,  and Vlade was 22.

The Sonics had two stars and got significant help from several other players. The Glove was at the top of his game and Kemp averaged over 20 and 10. Bulls won in 6 however as Jordan made his triumphant return after missing a full season and most of the season prior.

The Thunder were loaded with talent that had not gotten close to it’s full potential yet. The core 4 players were all 23 or younger at the time but they were still a force to be reckoned with. Having lost to the Mavericks the year before in the Conference Finals this team felt ready but when they got to the big stage Lebron was just hungrier. The Heat took this team down in 5 games and the Thunder started overthinking things thereafter. 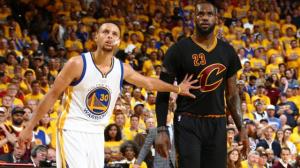 Where’s Harrison Barnes??? You mean the guy you clowned for not showing up in the series? None of his stats hit the threshold for consideration so I guess you all were right. Igouldala’s contributions dropped significantly (as you’ll see later) but this team was definitely no slouch as they round out our last tier (the top 4). 2016 Steph Curry is the best individual opponent on the list so far as well and the first MVP thus far. I think we know how this series went… 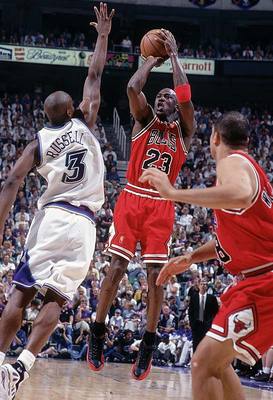 Compare this to the 1998 Jazz team that was the worst of all opponents and it’s a dramatic difference. Karl Malone had much more help in their first battle and was also MVP this season. Prime Malone actually is the best individual opponent Jordan or Lebron faced (by a nose) as well. Stockton was a completely different player from one series to the next which was another major difference here. Bulls won in 6. 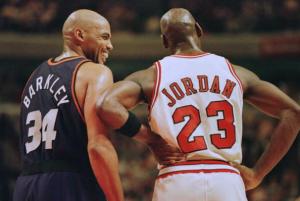 I believe this is the most overlooked team in the Lebron vs. Jordan opponents debate. I think people see Charles on TNT today and don’t really realize how good he was. Prime Barkley actually comes in as the second best individual opponent either faced and was a beast in the series. Dan Majerle is not sexy to Bronsexuals who are clearly not students of the game but he was a beast as well. This team also had major contributions from Kevin Johnson and the rookie Richard Dumas. Danny Ainge and Tom Chambers were on this team also but did not reach the thresholds for inclusion. Jordan walked away from the game for the first time after winning this title.

And finally, the best team either faced… the 2015 Warriors who beat Lebron’s Cavs in 6 games. This team would have been 18.6 points better had Bogut not missed two games since he was All NBA Defensive 2nd team and averaged 6 boards and 1.3 blocks per game. They didn’t need him to come out as the best team though. Steph was riding the high of his first MVP season and Andre Igoudala (who would go on to win Finals MVP) contributed in a major way in this series. That is actually the difference between this team and the 2016 version of the Warriors.

After crunching the numbers to come up with an average team rating for their opponents the battle comes out as such.

If you want to go back and include Bogut Lebron’s average strength moves to 213.72 but Jordan still edges him out slightly.

I’m not using this as a way to say Jordan faced better teams. Most will probably say “but you didn’t include this year’s Warriors team!!!” and I didn’t because all of the awards have not been announced yet. This team has a good shot of jumping to the top of the list and will almost definitely push Lebron ahead of Jordan but the point remains that Jordan was not playing against scrubs as the average Bron fan would like to believe. They faced fairly equal competition in the Finals and this does not even touch on the fact that Jordan had to take down Legends to even get TO the Finals.

I’m curious how you’ll feel about this piece so fire away at me on twitter (@MBibs). Please excuse any typos (feel free to tell me about them and I’ll gladly fix them) as I was completely focused on the numbers to the point where the words barely mattered to me.

Stay tuned for part two where I analyze their supporting casts to see if that narrative holds any weight as well.

One thought on “Lebron vs. Jordan Part 1: Opponents”